By Samira Civic on 9th June 2014 in Energija, Vijesti

BT has signed long-term Power Purchase Agreements (PPAs) worth £440 million with three wind farms in Scotland, Wales and Lancashire. The deals will secure more than 100 Megawatts (MW) of renewable energy to help power its UK operations.
The energy will be supplied from the 48-turbine Fallago Rig wind farm located 35km southeast of Edinburgh in the Scottish Borders, the new Heysham South Wind Farm in Lancashire and nine-turbine Mynydd Bwllfa Wind farm in South Wales. 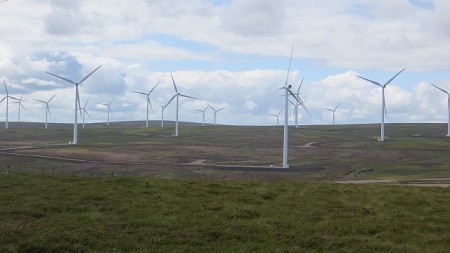 BT will purchase 50 per cent of Fallago Rig’s output, enough to match the power consumption of its entire Scottish operations, in a deal worth around £300 million over the next two decades.

Its 15-year, £100 million agreement with Mynydd Bwllfa will provide enough electricity to match around 50 per cent of BT’s demand in Wales.

BT has also secured a 15-year deal to purchase electricity generated by the new Heysham South Wind Farm in Lancashire, worth around £40 million.

The PPAs with BT are supporting the construction of both the Welsh and Lancashire sites. Pennant Walters (Mynydd Bwllfa) Ltd is currently building Mynydd Bwllfa, near Hirwaun, whilst developers The Banks Group Ltd will start construction of the three-turbine Heysham South wind farm, near Lancaster, over the next few months.

BT is a major consumer of electricity in the UK, using around 2 Terawatt hours (TWh) in 2013/14. It has reduced the energy needed to run its business for five consecutive years, saving more than £131 million in energy costs.

Rob Williams, BT’s head of energy supply, said: “These large-scale, long term agreements are a vote of confidence in UK renewable energy and support BT’s continued commitment to securing all its electricity from renewable sources.

“They not only give us long term price certainty but enable us to support local economies in which we operate, with the ‘New to the Planet’ agreements in Wales and Lancashire underpinning the construction of these two new wind farms.

“At BT we’re as focused on cutting our own carbon emissions as we are to providing products and services that help everyone live within the planet’s resources. We’ve reduced carbon emissions from our own operations by 25.5 per cent globally during 2013/14.

“These three agreements reinforce our commitment to make a positive contribution to society and the environment.”

BT’s sole supplier of renewable energy, npower, has worked closely with the company on all three projects, developing a new supply process in Scotland to deliver power to BT and ensure its electricity consumption is matched by equivalent volumes from Fallago Rig.

Wayne Mitchell, industrial and commercial markets director at npower, said: “As a long term partner to BT, we understand the importance of their Better Future strategy and do everything in our power to develop tailored solutions that will help them meet their sustainability goals.

“In Scotland, we asked our in-house experts to develop an innovative transmission solution that would mean BT was able to use the wind farm’s energy. The solution took six months to complete but it shows what can be achieved working hand in hand with some of our customers.”

BT has purchased renewable energy from npower since 2000 and started to source 100 per cent of its electricity in the UK from renewable energy after signing a new agreement with the supplier in 2012.

BT’s Better Future Report for 2013/14 demonstrates the company’s extensive work to put responsible and sustainable business at the heart of its operations.